You can’t have a discussion with locals about the Columbia music scene of the past without immediate and favorable mention of the bands Loch Ness Johnny, American Gun, and Bare Knuckle Champions….and to hear enthusiastic praise in response as stories are relayed of memorable shows, favorite songs and records, and the inevitable “I miss them”. As is the nature of the “musical beast”, bands as a whole as well as the individual band members (no matter how popular or successful) form, expand, morph, and re-invent themselves over time as the intricacies of life impact all those involved. Singer/songwriter and recording artist Donald Merckle’s combination of strong vocals and honest songwriting has been the common thread throughout the course of each of these bands and continues to flourish as he performs both as a solo artist and in his newest project, Don Merckle & The Blacksmiths, performing at The Woodshed on Thursday, September 19, 2013 at 8:45pm.

The Blacksmiths join Don Merckle on guitar/vocals and include Jason Brachman (guitar), former LNJ band members Kevin Pettit (bass) and Chris Lawther (banjo), and Stan Gardner (drums). Expect to hear the roots-grass, alt-country rock, and raw energy of Merckle’s former bands in this new and exciting lineup in addition to an increased level of maturity and complexity, all while reaching a level of honest simplicity that only seasoned musicians can accomplish.–KellyG 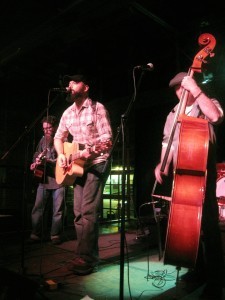 Live at the Woodshed [dmbs2013-09-19] by Don Merckle & The Blacksmiths is licensed under a Creative Commons Attribution-NonCommercial-ShareAlike 4.0 International License.
Based on a work at http://woodshedarchive.org/event/dmbs2013-09-19/.